Update JamesWeb, James!
29/11/2007 1:47 PM
Well this has been a slow year, apparently. It all started when I got this job thing, and suddenly money dominates my life, it's much more fun than entertaining people with my website. Also I blame... Politics, I guess.

I promise there's something big coming, HUGE even, maybe in time for Christmas. But failing that, JamesWeb's Annual Christmas Broadcast is coming back, I'll let you know when once discussions between the star's agents are complete.

And maybe there's a clue of what's to come this year somewhere on this page...

And much as I love IE, it does seem to have a quirk in that if all you can see above is a black square, just roll your cursor over it. No idea why. Shut up Firefox users, you shouldn't even be here.

JamesWeb with neat URLs!
04/08/2006 2:13 AM
You may or may not have noticed that JamesWeb has implimented a NUMBER OF IMPROVEMENTS. These are, in numerical order:Enjoy that! And do keep your eye on the JamesWeb Radio page, you never know when we might be on, but I dare say we're certainly worth a listen. Tarah!

First of all JamesWeb is now made of 100% recycled paper, I like to think I'm ahead of even most of the biggest companies in doing this, so... Y'know, few more trees for... Snakes, they're not going to complain.

Second call of order is that if you hadn't noticed yet, putting videos on these video sites is fashionable right now, so some random videos I've made with various friends and colleagues over the last year are now available on the delicious Google Video, but you can't have a link. YES YOU CAN. And if you were wondering for future reference, that link's under the Watch menu too.

On the subject of the new upcoming project, featuring John Major, it was about ready when I announced it last month or whenever it was, but... You know how it goes, the Thatcher's teeth error is slowing the final progress, but... It's something to look forward to surely.

And most importantly, I've been talking with Chris from the BBC, my oldest and dearest friend, and he says Windows RG is going to be on telly or something, I don't know... At a guess I'd say it'll be oon... Click, on BBC World on Thursday but in the UK on BBC News 24 at... A lot of times, check their site, oh you can watch it online there too, but not just yet.

At least I know about it this time though, apparently it was featured on TechTV in America at some point and I completely missed that, they didn't bother to email me about it, why can't they all be more like you, Chris? Give that man a raise!

If you could pick any colour...
31/01/2006 1:00 AM
Colours? John Major? Excitement? Just a few buzzwords released today in a long anticipated press release from JamesWeb Enterprises, relating to their upcoming upcoming release that CEO James Cliffe has described as 'A completely mindblowing experience, possibly the biggest JamesWeb release to date.'

Very little detail of the actual content of this upcoming update has been released, but James has ensured fans to 'Expect the unexpected, the unthinkable, and even the impossible.'

Christmas is here once agaaaain!
01/12/2005 5:00 AM
Can you believe it's that sexy, sexy time of year again where you get all warm and fuzzy inside yet cold and sore on the outside? I can. Because it comes around so often that it's not really suprising any more, which is why I've been working hard all year, and not just over the last week* to bring everyone a JamesWeb Christmas to remember.

This year's Christmas bulleted list consists of no less than:And of course there's all the old Christmas specials to be watched again over on the Christmas page, so watch them all again and reminice about good times passed... But also look forward to the good times... Ahead! Enjoy, and Merry Christmas!

* Although all the work did happen within the last week or so. And god Freaky sucks. 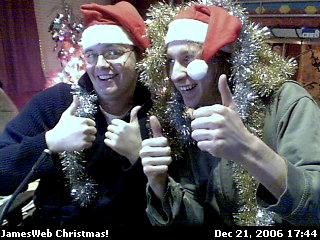 POLL!
If I made a new poll would anyone even notice?
I would!